Posted by: Olegario Llamazares on 25 May, 2018 in Business Etiquette, International Negotiations Comments Off on Keys to doing business in Sweden

Sweden is not only today a prosperous, stable and commercially consolidated country, but also the leader in economic growth of the region known as Scandinavia, (formed together with Denmark, Norway, and Finland), and the strongest commercial partner of Spain among the Nordic countries. Today is at the top of many rankings of competitiveness and ease of doing business such as the ones of the World Economic Forum, the World Bank Doing Business or the Forbes magazine

Sweden is the most populated country in Scandinavia, with almost 10 million inhabitants. It is expected that its regional leadership in economic growth, held since at least the year 2010, will continue in the coming years according to the forecasts of the main international financial institutions. Around 90% of its economy is mainly oriented to international trade. It’s important wealth in natural resources (wood, iron, lead, copper, zinc …) and its dynamic industrial sector, at the forefront of technology, constitute together 50% of production and exports. Among its most internationally recognized firms, which create trends and occupy leading positions in their respective sectors, are Volvo, Saab, Ericsson, Scania, AstraZeneca, TeliaSonera, Electrolux, Ikea and H&M.

Its pillars of prosperity are the global economic recovery, which boosts its exports (that grew by 3.2% only in the last quarter of 2017), the laxity of its monetary policy, the investment in the construction sector, the impulse of private consumption due to the decrease in unemployment, and public spending (of great importance, given the extensive network of companies under government control in the energy, transport and telecommunications sectors).

On the other hand are the risks that part of these pillars project in the long term: the very low inflation, consequence of its monetary policy, which generate concern that an overheating in the construction sector could lead to falls in the price of housing, which in turn would affect the macroeconomic figures. There is also a debate on the extent to which Swedish growth has been inflated in recent years by the large population increase due to its record immigration and high birth rate: in this sense, the difference in growth in 2018 between total GDP and GDP per capita has never been so great since 1950.

Despite the possible doubts that can be projected in the medium and long term, the fact is that Sweden today holds an indisputable position of preeminence in its region and offers foreign companies business opportunities in sectors as diverse as renewable energies (it aspires to become the first nation in the world independent of fossil fuels), organic food and drinks (whose consumption grew by 18% in 2016 alone), IT, health and life sciences (global leader in pharmaceutical innovation), industry (electricity price among the lowest in the EU), construction, agriculture, transport and economy through the internet (which grows 10% annually and already accounts for 8% of its GDP). 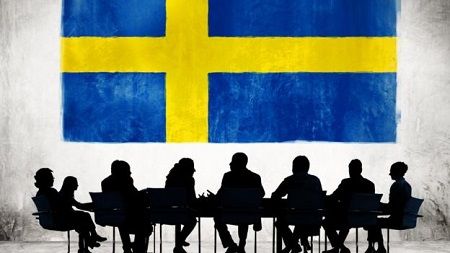 In order to take advantage of such opportunities and avoid cultural clashes when negotiating in Sweden, we offer below 10 keys that we recommend every foreign entrepreneur should take into account when addressing a potential Swedish partner, either at a negotiation table or in his preliminary contact aimed at establishing future cooperation:

1. Conduct a sectoral study that could allow you to decide if there is demand for your product. Sweden is an extremely mature, competitive and informally protectionist market. Although it is a full member of the European Union (and with full duties, except in monetary policy), the truth is that local distributors and suppliers tend to give priority to the national product, if there are domestic analogues. In that sense, the abundant penetration of the Internet (over 92%) and the ‘virtualization’ of many business sectors allow the first approximations to be simple and do not require large costs.

2. The first meeting will tend to be low profile. In it, a preliminary evaluation of your company, your product and your proposal will probably take place. In the vast majority of cases you will be able to hold your meetings in English, thanks to the excellent implementation of its teaching in most of the country’s educational levels.

3. Strictly observe the rules of punctuality. Arriving on time is not only an essential element of the Swedish business culture, but also an immanent one to social life. Likewise, do not forget to arrange meetings at least a week and a half in advance, without last minute changes, not after 4 pm and always during business days (holiday periods of low business activity are usually Christmas, end of February, beginning of March and the months of June, July and August). Swedes scrupulously respect their assigned leisure time, so do not expect them to dedicate time to you outside of their working hours.

4. Business meetings are usually perfectly scheduled and follow a specific agenda, which strictly respects the start and end times. Likewise, not maintaining or subsequently modifying unilaterally the commitments and agreements resulting from these meetings can destroy image and credibility with potential Swedish partners, who tend to value predictability as an essential factor in any professional relationship.

5. Importance of facts and figures. The information in a collaboration proposal must be presented clearly organized, in advance and with the necessary detail. Make sure that your presentations are based on facts and concrete and verified data and give more importance to the content than to the design. In your presentations, eliminate the ornaments and try to avoid any form of arrogance, exaggerations or superlatives.

6. Business formality. Although Swedes usually allow themselves certain informalities in their business culture, such as always calling each other by their first names, to the detriment of more traditional habits, the reality is that in Sweden the sphere of the private sector and the one of business are strictly segregated. Keep a serious attitude and with straight composure in your first meetings. Swedes tend not to show their emotions excessively, which can sometimes lead foreigners to errors of judgment regarding their intentions: pay attention to the facts and avoid emotional reactions, which can make a bad impression. Concentrate on projecting sincerity and seriousness rather than displaying premature friendly behavior. Little time is lost in informal conversations prior to meetings. However, when the professional relationship progresses, certain licenses will appear, such as holding meetings in informal environments (coinciding with lunch or dinner, rarely breakfast). Equally, there are usual mechanisms of relaxation in the Swedish business environment, such as the one known as ‘fika’ or coffee break, moment par excellence to chat in a more relaxed environment. The importance of formality is also evident in the fact that verbal agreements are considered as binding as written ones: try not to propose anything lightly, because it could be seen as a tacit future commitment on your part.

7. No uncomfortable silence: Swedes are considerably more comfortable than Southern Europeans when there are silences and long pauses. On the contrary, they evaluate very negatively the interruptions in the framework of a business conversation, with respect to which Mediterranean people tend to be much more flexible.

8. Avoid sensitive topics and jokes out of context. Especially cultural ones or those that affect racial or gender minorities. Also family issues, excessive superficiality or unproductive complaints. On the contrary, try to arrive in Sweden with certain ideas correctly shaped about the Swedish economy, their standard of living and the history of the country, which will allow you to establish respectful conversations that will generate confidence for the future of your commercial relations. Likewise, it is not advisable to fuel confrontations of any kind: seek consensual solutions. The Swedes value the direct confrontation in business very negatively. You can be direct, but never offensive. On the other hand, do not try to force or improvise agreements: what is decided will be by consensus and usually after long discussions involving multiple people of different ranks.

9. Hierarchy blurred. The hierarchical structures in Sweden are much more dilated than in other countries, so that decisions are not made by certain top executives with a higher power, but tend to be adopted equally, through working in team and a consensus model. During such processes personal elements tend to be excluded, so that negotiations are usually based on principles and data: in this way, it very rarely comes to confrontation or personal offense. Because of its particular configuration, business decisions in Sweden usually require much more time, but once they are made they are also much firmer. The preference for long-term thinking leads the Swedes to want to investigate and analyze everything before reaching a definitive conclusion.

10. Contemplate the Swedes as the proud early adopters of new technologies in Europe: If you consider Sweden as a test market for new products which you later wish to direct to the rest of the continent, you will be able to take advantage of the multiple benefits derived from the predisposition of the Swedes to experiment with the innovative and become the first users of new products.

To obtain information about doing business in 70 countries click on: Business Culture and Etiquette Guides in 70 Countries

Tagged with: business culture in Sweden Doing Business in Sweden etiquette in Sweden