The Incoterms 2010 rules have made some significant changes that will be in force, at least, till 2020. These changes include both the elimination and creation of new terms, modification of certain uses of the existing terms and adapting the rules to the operational logistics, Internet communications and security procedures that have been implemented at the borders of countries. A complete and up-to-date information about these changes can be found in the e-book Practical Guide to Incoterms.

Incoterms 2010 have created two new Incoterms: DAT (Delivered At Terminal) and DAP (Delivered At Place). The first replaces the three Incoterms DES, DEQ, and DAF, when the merchandise is delivered to the destination country in a terminal or transportation infrastructure (port, airport). DAP has a function similar to DDU, as noted above.

This is perhaps the most significant change in Incoterms 2010. If the cargo is loaded into a container, the Incoterms 2010 clearly state that sea terms should not be used, even if the delivery takes place in a port. The reason is that containers are delivered to the port terminals, before being placed on board of the ships. When the goods are transported in containers should not be used FOB, CFR or CIF, but their equivalents for multimodal transport, which are respectively FCA, CPT and CIP.

Transfer of risks “on board” in Incoterms FOB, CFR and CIF

In relation to the Incoterms 2000, the 2010 version eliminated four terms

When using Incoterms in which the seller pays the main transport – such as CPT, CFR, CIP or CIF-, the seller includes in the purchase price the cost of transport to the destination including the costs of terminal what is known as THC (Terminal Handling Charges). However, it happens that most of the transport companies carry the cost of the terminal, in particular, the discharge of goods on the buyer and, therefore they pay twice for the same service. To avoid this duplication, Incoterms 2010 establish that the terminal costs should be allocated according to the stipulations of the transport contract. They also state that if the seller bears the costs of discharge at the destination port, according to the stipulations in the transport contract, they shall not be entitled to demand the return of the buyer unless otherwise agreed.

Since the attacks of September 11, 2001 various measures to ensure the safe transport of passengers and goods have been put in place. Following these practices, Incoterms 2010 establishes the obligation of the seller to assist the buyer to obtain all information concerning the safety of the goods or their transportation to their final destination. However, Incoterm 2010 states that any costs resulting from obtaining such information will be borne by the buyer.

Validity of electronic messages and documents

Incoterms 2010 granted the same validity to the messages and documents transmitted electronically to those that are supported on paper, if it is agreed by the parties or is a common practice. The use of electronic means facilitates the obligation to notify the parties with different information (place of delivery or receipt, date, name of carrier, etc.) and the transmission of documents relating to export and import formalities.

International and national use

Although Incoterms are in the peculiarities of foreign trade, the 2010 version refers to its use also for domestic trade. This new approach regarding the scope has two justifications: first, there are areas of economic integration (such as the UE) that have the consideration of “domestic” market when customs disappeared. On the other hand, the internal regulations in the U.S. terms of trade – known as RAFTD (Revised American Foreign Trade Definitions) – no longer in force, are expected to be replaced by Incoterms, both in internal operations between U.S. companies and in foreign trade operations between U.S. companies with companies in other countries. 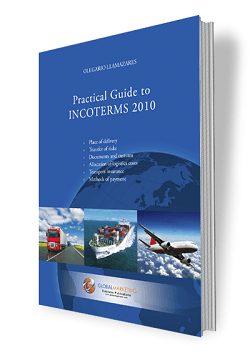 You can obtain complete information about Incoterms in the ebook Practical Guide to Incoterms 2010.