You are here: Home » International Trade » What is e-CMR?: benefits and implementation
Descargar en PDF Download in PDF

What is e-CMR?: benefits and implementation

Posted by: Olegario Llamazares on 5 August, 2021 in International Trade Comments Off on What is e-CMR?: benefits and implementation

The e-CMR or electronic CMR is the digital equivalent of the CMR Transport Document in paper-based format that is used and signed in 4 copies (sender, consignee, carrier and administration. Its use implies adherence to the CMR Agreement (Contrat de Transport International de Marchandises par Route) that regulates it.

At present, 25 European countries have already ratified the e-CMR protocol, among them all the important countries that are members of the EU such as Germany, France, Italy or Spain, as well as non-EU countries such as Turkey. In January 2017, the first electronic CMR freight transport was successfully carried out between Spain and France. A truck transporting fruit from Huelva (Spain) to Perpignan (France) marked the first cross-border use of the electronic CMR or e-CMR. 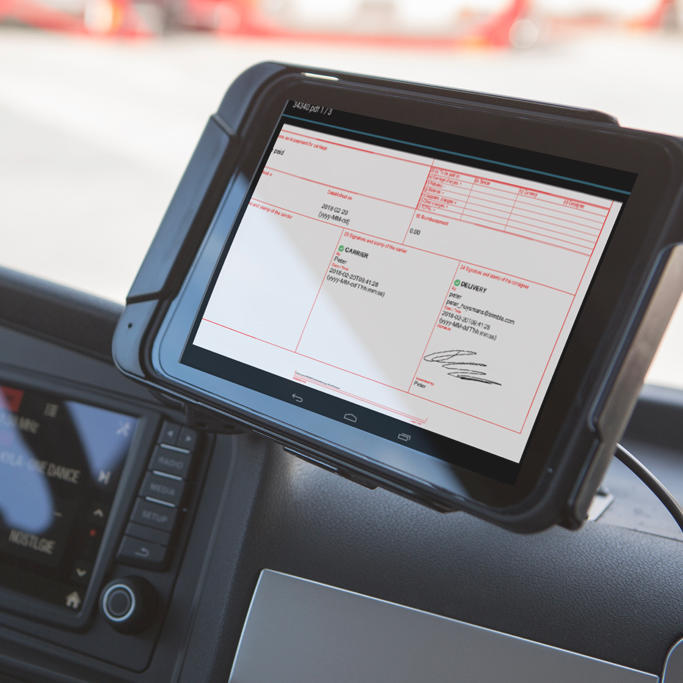 In its paper-based format, the CMR Transport Document brings many benefits: it harmonises contractual conditions for goods transported by road and helps facilitate goods transport overall. A global e-CMR solution would retain all these benefits, but would make the system more modern, by removing paperwork and handling costs. This is why IRU supports its members and the wider industry in adopting e-CMR.

Some of the benefits to e-CMR include:

Because of its digital nature, e-CMR can also be easily integrated with other services used by transport companies, e.g. customs declaration or transport & fleet management services. By moving to an electronic format, the three parties involved in each shipment benefit from increased overall efficiency of logistics, resulting in increased economic competitiveness. A final benefit is greater road safety, as e-CMR can be linked to eCall, a system for trucks that automatically dials emergency services in the event of a road traffic accident.

How does the e-CMR work?

The implementation of e-CMR entails the need for a partner who can act as a “trusted third party”. This must guarantee the legal coverage of operations and ensure the veracity, security and traceability of the information contained and updated in the e-CMR throughout your trip. Thus, in Europe there are two relevant solutions that respond to this need: Transfollow y Pionira.

All e-CMRs are managed from a platform that acts as a “trusted third party”. In addition, each reservation, modification and change of status is made by electronic signature of one of the parties through the same application. This ensures the legitimacy of the information at all times. In addition to granting legal validity to the information contained in the e-CMR, since the document is unalterable and unmanipulable.

How can it be implemented?

In particular, the Transfollow platform is relatively simple to implement. It integrates via API to the management systems of those involved and automatically builds the e-CMR into the platform for querying and processing. For a freight forwarder, the implementation consists of integrating the chosen application via API. This allows that, at the moment of generating a transport order from the ERP software, it is automatically generated in the e-CMR platform. Without printing anything. The carrier, connected to the platform, receives the e-CMR for the transport of the goods through his mobile device. While at the end point, the recipient receives the goods using his own integration with the platform.

Although the implementation of an e-CMR solution is simple from a technical point of view, it requires the adoption of the maximum number of actors in the logistics chain in order to be useful. As with all clearing house platforms, the biggest challenge to the optimal functioning of an e-CMR management platform is adoption by the logistics sector and the public administrations involved. Logistic operators have to take the initiative, advising themselves with their technological partner in order to achieve a greater digitalization of their operations.

Who fills in the e-CMR?

The person in charge of filling in the e- CMR is, as a general rule, the exporter or sender himself, although there are also situations in which the carrier or driver fills it in, such as when the CMR is issued by a transport agency. Only postal, funeral and moving transport are excluded from the obligation to carry the e-CMR.

To get the main Transport and Trade documents click here: